APS Campus Teachers of the Year presented at BOE meeting 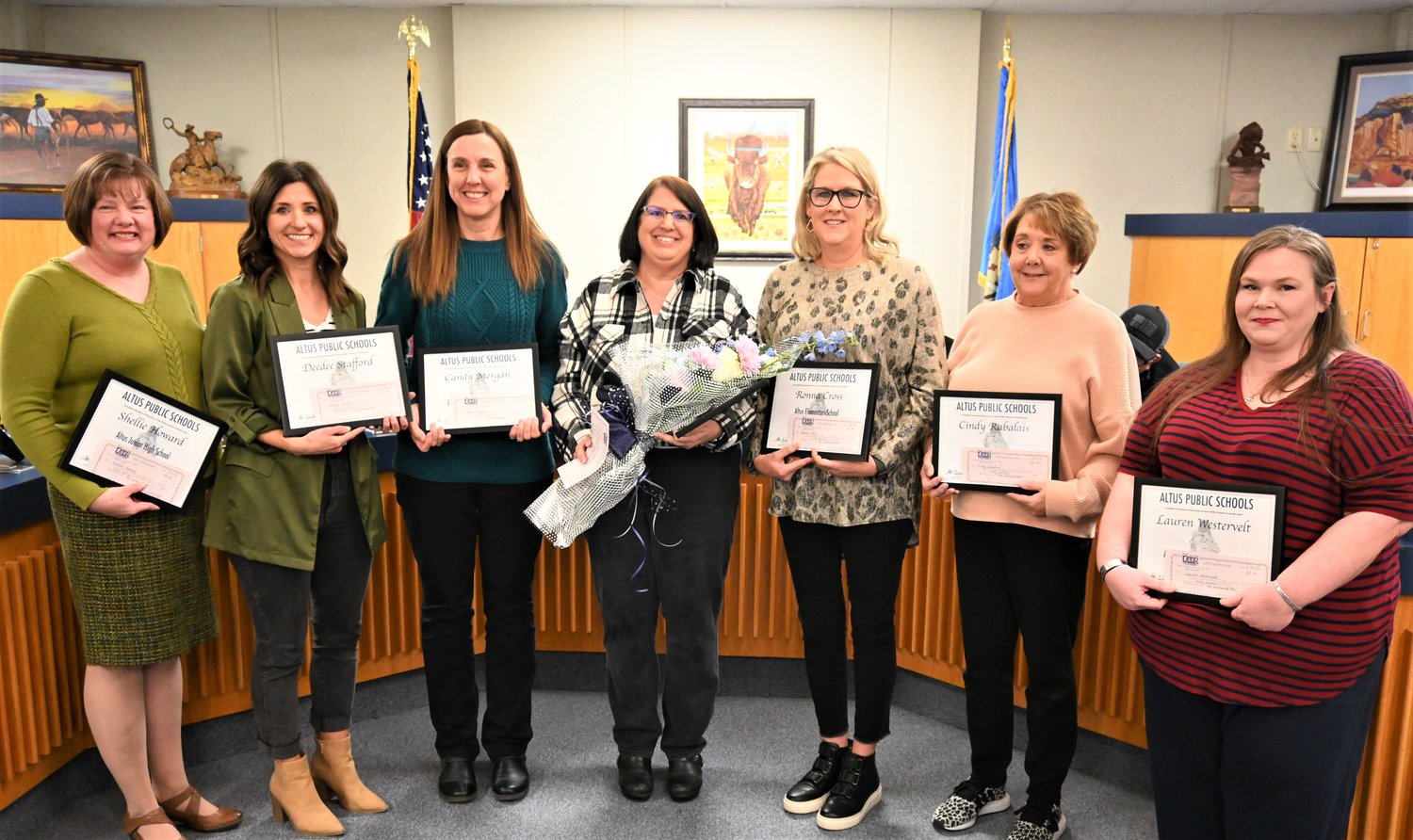 Rhonda Garrison was announced the 2023 Teacher of the Year at the Jan. 9 meeting of the Altus Board of Education. (SEEE STORY, PAGE ONE)

In December, each school in the Altus Public School District selected a site Teacher of the Year.

Nominees were submitted and certified staff in each building voted for one teacher to represent their school in the district-wide Teacher of the Year contest.

A committee reviewed the winners’ resumes and essays and three were chosen as top three Candidates.

Certified staff throughout the District were able to vote on the 2023 Teacher of the Year.

Candy Morgan was named the 2023 Rivers Elementary Teacher of the Year.

Mrs. Morgan has taught in Altus Public School for 27 years with 25 of those being at Rivers Elementary, teaching 1st, 2nd, and 3rd grade students. Mrs. Morgan was previously named the Rivers Teacher of the Year in 2003-2004.

She says, “Being a teacher means long hours, hard work, and patience beyond words. It also means being fortunate to be able to spend my days with young children filling their minds and hearts with knowledge, confidence, and love.”

Mrs. Westervelt began teaching in 2007 and in 2010 joined Altus Public Schools.  She has been teaching Special Education for the past 12 years.

Mrs. Westervelt believes that being a teacher means being a life-long learner, so much so that she is currently taking college courses to obtain an associate’s degree in Speech and Language Pathology.

She is grateful to the paraprofessionals for being teachers in the classroom with her.

The 2023 Altus Primary School Teacher of the Year is Cindy Rabalais.

She has been teaching students in the Altus School System for 30 years. Mrs. Rabalais retired from teaching in 2015 and returned to the classroom full time in 2020. She was previously named the Sunset Elementary School Teacher of the Year.

Mrs. Rabalais says that being a teacher was a dream she was able to fulfill. “The time away made me realize how much I missed teaching,” she stated.

Ronna Cross was named the Altus Elementary School 2020 Teacher of the Year and a top 3 finalist.

Ronna has been teaching physical education in Altus Public Schools since 1993. In 2013 she was named the Sunset Elementary School Teacher of the Year. In 2020 she began her career as an AIS and AES Little Dribblers coach.

“For me, providing a safe and happy place for students is important,” said Coach Cross.

Her colleagues at Altus Intermediate School selected Deedee Stafford as their 2023 Teacher of the Year.

Mrs. Stafford teaches 6th grade math at AIS and has previously taught mathematics at Altus High School.  She has 18 years of teaching experience.

“From an early age, I decided to become a math teacher because it seemed to be the class that most kids struggled with and I wanted to make it fun,” Stafford said.

Altus Junior High selected 8th grade Pre-Algebra and Algebra I teacher Shellie Howard as their 2023 Teacher of the Year.

Mrs. Howard has 22 years of teaching experience, all of which have been at Altus Junior High. She also serves as a mentor teacher and the chair of the AJH math department.

Mrs. Howard has previously been named the Altus Junior High Teacher of the Year and Masonic Teacher of Today.

Shellie says it best, “The future depends on every teacher.”